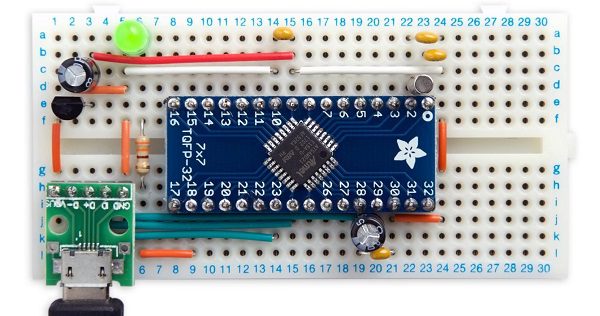 Johnson Davies shared detailed instructions of how to build an ATSAMD21-based computer on a prototyping board using a 32-pin ATSAMD21E:

If you’re looking for something more powerful than the ATmega328 in the Arduino Uno a good choice is the ATSAMD21. This is an ARM Cortex M0+ processor with up to 256KB flash memory, 32KB RAM, and a 48MHz clock, so it’s substantially better equipped than the ATmega328. In addition it has a USB interface built in, so there’s no need for a separate chip to interface to the serial port.
Arduino have designed several excellent boards based on the ATSAMD21, such as the Arduino Zero or smaller-format MKRZERO. However, these boards are an expensive way to use an ATSAMD21 as the basis for your own project, and they probably include many features you don’t need.