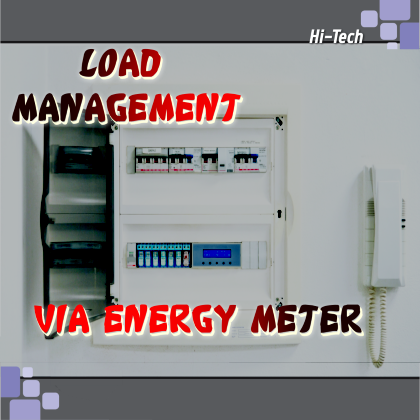 A detailed instructions of how to build an Energy Load manager from Open Electronics:

When the instantaneous power consumption exceeds the set values, it selectively disconnects the users, in order to prevent the electric meter to cut the power to disconnect.
The management of the electricity users at home, intended as the possibility to define the operating priorities and to momentarily disconnect the ones that may be “sacrificed”, is something that has become important since the coming of the electronic meters. With respect to the traditional ones, such meters are in fact a bit less tolerant towards the overloads, and they could suddenly leave us without power. Given that nowadays the electric meter is almost always outside and that in order to rearm it we should get out of the house; not to mention that the disconnection will probably turn off the computer that is sending files via the Internet, or that a user might not be able to shut down. In order to prevent such a situation, we created the load manager: in the previous installment, we described its hardware. It is now the moment to deal with the software governing it, and with the management of its functioning via the user interface.