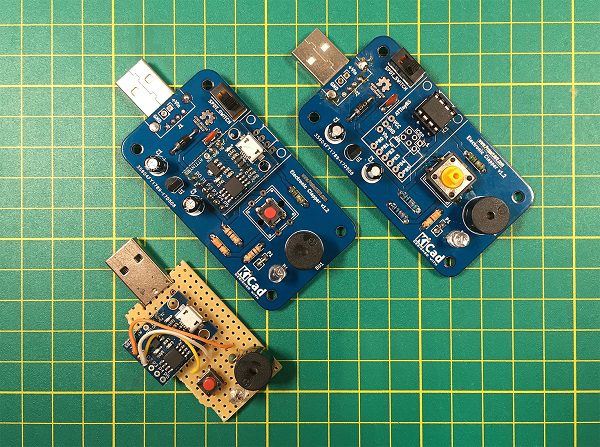 Steve Smith from ProjectAVR has published a new build:

On the board, I included several options to tailor the design to the builders taste. Provision for both a digispark board or bare ATTiny85 chip, small or large tact switches and a jumper to defeat the LEDs supply resistor for extra brightness.
I chose to build the Digispark version first. It went together easily (bar a hole size issue, more of that later) and I programmed the digispark via it’s own USB socket. And… the board completely failed to start up. It took me some time to realise that I’d got the USB power connections inverted! Lucky I’d added a reverse polarity diode! I de-soldered the USB ‘A’ type plug and re-soldered it on the back side of the board flipping the connections. I don’t have the correct type of USB plugs anyway, so it’s a bit of a kludge at the moment. However, once this was done, the board sprung to life. When powered up, the Digispark’s micronucleus bootloader kicks in for a few seconds and then the Clapper code starts.