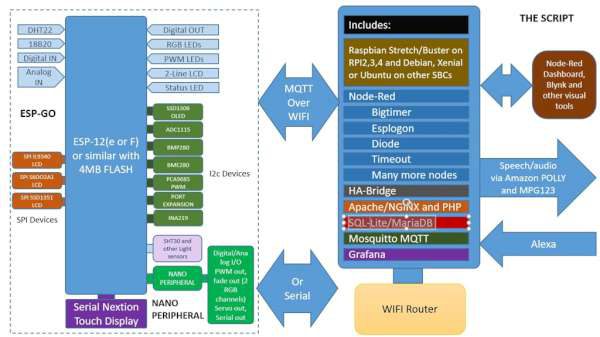 Regular readers will know about the script that Aidan Ruff and I originally developed to put Node-Red and several other packages onto the Raspberry Pi for our own home control purposes. This has been developed with help from several people and in particular my friend Antonio “Mr Shark”.
WELL – here is the script which is intended to help set-up certain Raspbian, Debian or similarly-based SBCs which now includes logging and handling Raspbian Buster (tested on Raspberry Pi 2, 3, 3B+, 4 with Stretch, 3B+ and 4 with Buster). As well as it’s original purpose of setting up a Raspberry Pi, the script also runs well with several other boards. See right hand side of the above image for what the script does, given a basic operating system install. We currently suggest NOT using this with DIET PI, original Pi or the Raspberry Pi Zero as we are no longer testing either and the latter pair are just TOO SLOW.