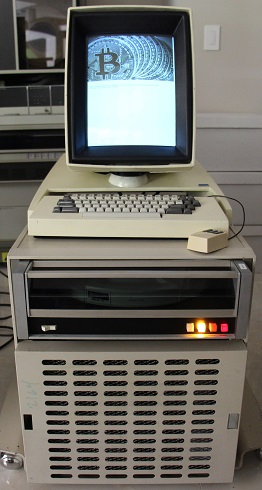 I’ve been restoring a Xerox Alto minicomputer from the 1970s and figured it would be interesting to see if it could mine bitcoins. I coded up the necessary hash algorithm in BCPL (the old programming language used by the Alto) and found that although the mining algorithm ran, the Alto was so slow that it would take many times the lifetime of the universe to successfully mine bitcoins.
The Alto was a revolutionary computer designed at Xerox PARC in 1973 to investigate personal computing. It introduced high-resolution bitmapped displays, the GUI, Ethernet and laser printers to the world, among other things. In the photo above, the Alto computer is in the lower cabinet. The black box is the 2.5 megabyte disk drive. The Alto’s unusual portrait display and an early optical mouse are on top.

See the full post and more details on his blog, righto.com.