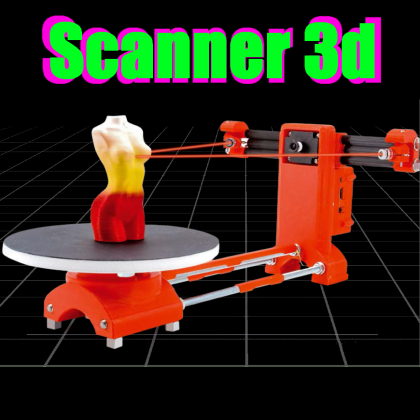 This being said, we may move on to talk about our 3D scan approach, that consists in using a linear laser, that is, one capable of drawing a vertical line having a constant luminous intensity, and in shooting the images that have been determined by the light’s reflection on the object’s surface (that in this case is rotated) by means of a video camera; at each rotation degree (or fraction) corresponds a frame that is digitized and sent to a program capable of processing the surface of the scanned object. Usually, in these systems two lasers (tilted with respect to each other) are used, and the video camera is placed between the two. Our scanner is born out of an elaboration of the PiClop, an open project composed of a mechanics (whose parts to be 3D printed may be downloaded from thingiverse ) and of an electronics formed of the Raspberry Pi 2 board and its video camera; PiClop, as implied by the name, is a free interpretation, based on Ciclop’s Raspberry Pi 2 , a 3D commercial laser scanner and a video camera, supplied with a rotating plate.