The Bus Pirate project currently has four firmware builds (v3/v4/v5/vNG1) under two toolchains (PIC C/ARM C). To make this more manageable, we use a cheap VPS to check for new code in our git repo and compile the firmware automatically. Fresh compiles are available for everyone immediately, without any intervention from developers or friendly forum members.

We wanted extremely tight integration with BusPirate.com so we rolled our own script instead of using a tool like Jenkins. This post covers:

Is there new code to compile?

Creating builds for a bunch of platforms is boring, let’s automate it! First we find out if there’s new code to compile. With git we can check the log before and after a ‘pull’ command.

Check the git log for the long hash of the current local repository.

Pull the latest commits and update the local repository.

Compile the latest code and then do something useful with the output.

A build server can definitely run in your basement or at the hackerspace, but a $5/month VPS from Vultr or DigitalOcean is a super slick option. We run Ubuntu 14.04 LTS 64bit because some of libraries we need aren’t available for newest versions of Ubuntu.

Install instructions for both toolchains are in shell script .sh format. You shouldn’t run these! Defaults and version numbers change. Some user interaction is needed. Open a shell terminal and paste the lines one at a time. Notes in the .sh file explain each step.

PIC firmware can be compiled on a headless Linux server since Microchip released MPLABX and the XC compilers. Installation is a bit tedious, but the toolchain works great. bp-install-mplabx.sh documents our setup. Credit to this solution.

ARM GCC is easier to setup than the PIC toolchain. Install the compiler, pull the source, then compile libopencm3 and the Bus Pirate NG firmware. bp-install-armgcc.sh documents our install.

buildv2.py runs ‘git pull’ every 10 minutes. If there’s new commits, the source is compiled and the firmware is uploaded to a server for further processing. Follow the steps in bp-install-autobuild.sh to install and configure the build service.

buildv2_tasks.py has settings for the repositories and builds. Each repository can have multiple build tasks. The PIC-based Bus Pirate repo is pulled once, then compiled for three hardware configurations (v3/4/5).

The service can be started from the command line with:

If the service is installed in /etc/init.d it will start with the operating system. The script has been stable for months at a time, but we play it safe and use monit to restart the service if it crashes. 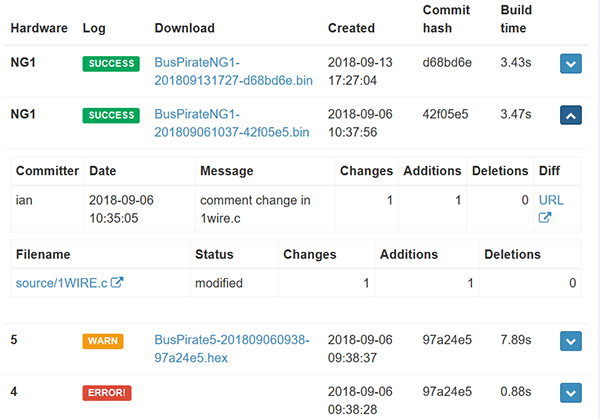 The firmware and build logs are packaged into a JSON file and uploaded to an API at BusPirate.com. Here’s an example of the JSON output, the important variables are described in the table below.

BusPirate.com serves up the fresh build and notifies anyone subscribed to the mailing list. We also grab all the commit notes and change history from GitHub so it’s easy to see what’s in the build. You can check it out here.

For the rest of this week we’ll be testing a new version of Dirty Cables at DirtyCables.com.