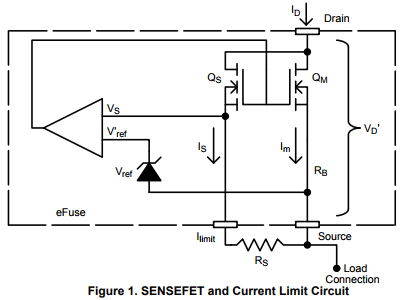 App note from ON Semiconductor about eFuse or Electronic fuse. Link here (PDF)

The primary function of an Electronic Fuse, or eFuse, is to limit current, the same function provided by any fuse or positive temperature coefficient device (PTC). An eFuse, however, provides this function with much more versatility than either of these devices. An eFuse, unlike a standard fuse, need not be replaced after it functions and eFuses also respond more rapidly than a either a fuse or PTC. eFuses can also limit current in situations in which a traditional fuses and PTCs will not work. This is especially true when voltage is first provided to a circuit, such as during a hot plug operation, when inrush current can be extremely high. This application note will explain the basic operation of an eFuse’s current limit function and explain important eFuse concepts such as Overload and Short Circuit currents, and Kelvin versus Direct connection of the eFuse’s current sense resistor.